David B, a very active gentleman in his 60’s, ordered a home stool test back in autumn 2013.

His story is inspiring and it’s my hope that it encourages and  inspires you to take action to beat your symptoms.

David made the decision to get the test done as he’d been struggling with a wide range of symptoms for quite a while, including:

As luck would have it, just a few short months later David’s symptoms improved remarkably.

David’s stool test revealed some of the main reasons for his symptoms, and by dealing with the findings, he was able to significantly improve his quality of life.

The main findings from David’s stool test are shown below.

You will see that he had a whole range of bad bugs residing in his gut, listed in red:

In other words, he had FIVE different bad bugs.

No wonder he wasn’t feeling in top shape. 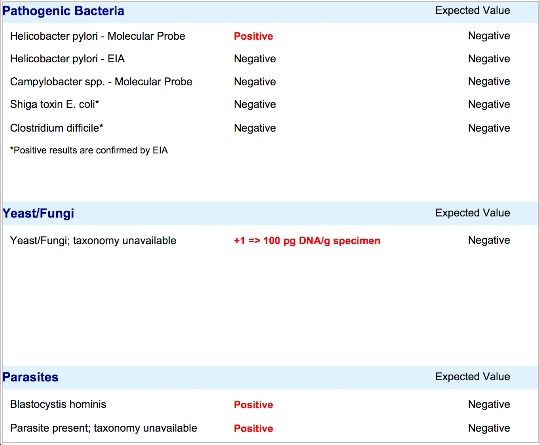 We also discovered that David was also not digesting protein properly, which is a major problem for several reasons:

We had a fair bit of work to do…

The first step, as always, was to straighten out David’s diet and eating habits.

On top of these basic considerations, David followed a strict anti-parasite and anti-fungal protocol for 60-days.

He then followed-up with a stomach cleanse protocol to address H pylori.

Recall David’s symptom list and look at the progress he made, in his own words:

David did a great job following the eating plan and protocols laid out for him.

It’s testament to his commitment that he achieved such exceptional results.

A crucial point for you to understand

When David re-tested for H pylori, the result indicated it was still there.

This illustrates a really important point.

Many people come to us thinking H pylori is the problem only to find that eradicating H pylori brings zero symptom relief.

In many cases, it’s other bad bugs that cause the problems (other bacteria, parasites and fungi like Candida).

In other cases, it’s simply the foods that people eating.

How do you know what’s causing YOUR symptoms?

The fact is that you have no way of knowing what’s causing your symptoms unless you take steps to find out.

By far the fastest and most effective way is to run a comprehensive stool test.

It’s sent to your door and in the privacy of your own home you provide a stool sample.

It’s not the most pleasant of experiences, but if it helps you take your health back, it’s worth the stink!

You send it back to the lab, who analyze it for tons of things that could be making you feel unwell.

On receiving your results, we run a thorough 60-min consultation with you to explain what the results mean in the context of your health history and symptoms.

Once we have all the data, we can then begin designing a specific and individualized program to help you improve and overcome your symptoms.

Just like David and many other people have done, you can reclaim your health and vitality starting now.

You can find out more about a stool test, or arrange one, here.

One Response to How David beat fatigue, mood and skin problems

This website uses cookies to improve your experience while you navigate through the website. Out of these, the cookies that are categorized as necessary are stored on your browser as they are essential for the working of basic functionalities of the website. We also use third-party cookies that help us analyze and understand how you use this website. These cookies will be stored in your browser only with your consent. You also have the option to opt-out of these cookies. But opting out of some of these cookies may affect your browsing experience.
Necessary Always Enabled
Necessary cookies are absolutely essential for the website to function properly. This category only includes cookies that ensures basic functionalities and security features of the website. These cookies do not store any personal information.
Non-necessary
Any cookies that may not be particularly necessary for the website to function and is used specifically to collect user personal data via analytics, ads, other embedded contents are termed as non-necessary cookies. It is mandatory to procure user consent prior to running these cookies on your website.
SAVE & ACCEPT